Hey, I am just starting some jobs with the MK6 and I am trying to find some good cutting / filling configuartions for wood.
I tried some simple squares and I noticed that the filled square is way too wide (23mm instead of 15mm in the x-axis). If I run the job cutting the line only the square is just fine 15x15 (see picture)

Also: in the middle of the filled sqare there is always an area engraving deeper… has someone the same problem? How can I get rid of it? In general, the graving is not looking so smooth… any ideas on that too?

Thanks for any help here!

(PS: it appears always, so it doesn’t depend on the wood stucture…) 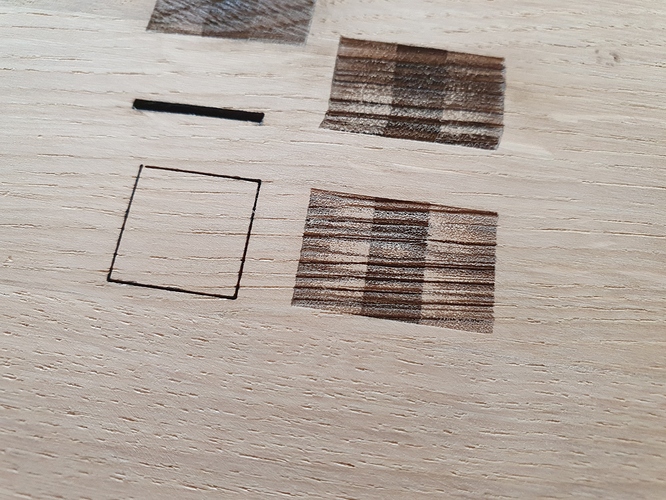 The engraving looks to me like two 15x15 squares, overlaping eachother in the center. But i can’t tell you why this could be the case.

Mhh yes this seems to be the case. Adding the overlap to the squares it adds up to two 15x15 squares… The big question is why?

By engraving you actually have an offset Square.
You need to set up the line shift in scanning offset adjustment. 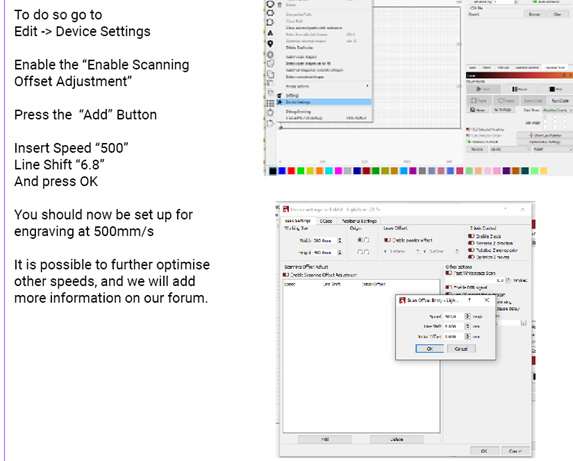 You have to find out for every speed the right offset value. I Can share later on our founded values with the mk6

Hey @cmachtel, thanks for this hint. But is this really the only option to deal with this problem? I have to enter every speed I want to use to and match that with an Offset adjustment? If so, would be great if you can help me out with your settings here… But what happens when I use a speed in between two entered offsets?

I was also reading something about the ‘PWM Rising Edge Valid’ in the Ruida Controller… might this be the solution? PWM Setting

@FabCreator Have you an idea about this toppic? I guess I am not the only one having this problem, as I have not changed anything about the controller settings you have defined for the MK6. Any suggestions on that? Thanks!

ery speed I want to use to and match that with an Offset adjustment? If so,

This file has been truncated. show original

With raster engraving it is necessary to find these values as it need to compensate for the laser turning on. we found the value for 500mm/s and tend to just engrave at this speed.
The values should be pretty much identical for every machine so @cmachtel values should work with yours.

We are looking into an issue of what would appear to be lost steps. somthing which is not possible with closed looped motors found in the FabKit/CorePlus.
We opted for these motor on recommendation from a friend who uses them in a metal 3D printer. They discovered a slippage on the pulley could occur when accelerating/changing direction quickly. You cannot feel it when testing for blacklash as you need the sudden torque of the motor to create the slip.
We currently dont have a FabKit/CorePlus, more to assemble next week. Once i confirm thats whats happening it should be an easy fix with a bit of loctite

but it does explain why it only seems to lose precision when doing lots of small repetitive vector engraving
An option for the moment can be to reduce the acceleration.

The PWM value should be correctly set as its not a skew you are seeing but a ghosted image which is to do with either backlash problems or the delay DC CO2 lasers have.

Alright then. I will test the settings and do some filling tests and adjust the offset. What is actually the recommended maximum speed of the x and y axis? 500mm/sec is quite high for my understanding…

Are there also some other basic settings I have to configure and think about?

And one quike unrelated question: Is it possible to adjust the zero/zero point in lightbrun to the point in the machine where my material has its zer/zero point? Otherwise I always have to add the offest between the home piont of the machine with the offest where the material starts…

Thanks for the help!

500mm/s is fine for rasting. (Fill) Thats when the x axis moves left and right quickly and the laser pulses to create your image

for vectoring speeds it should be a lot slower than 500mm/s. As the laser tube is being moved you have more mass so id recommend a speed around 50mm/s.

FabKit-Core+ v3.zip (1.5 KB)
The error over long detailed jobs may have indeed been because the PWM was incorrect.
Give these settings ago, make sure to save your existing ones in LightBurn before you copy these over just incase you want to revert

@FabCreator This solved our issues, 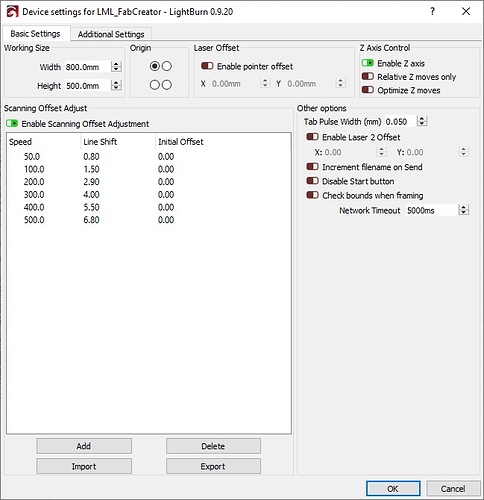 @FabCreator thanks for the info. So changing the PWM did solve the problem? I will give it a try then.

Yeah flicking the pwm type solved it.
Lightburn will calculate based on the values you input, so the more points you add the more precise it will be.

As a follow-up and for future reference, I had to tweak a bit more (see the pictures of before and after). My line shifts are:

I found these by trial and error and adjusting a tiny bit more or a tiny bit less
(using cardboard for testing). I also attached the lightburn file I used. 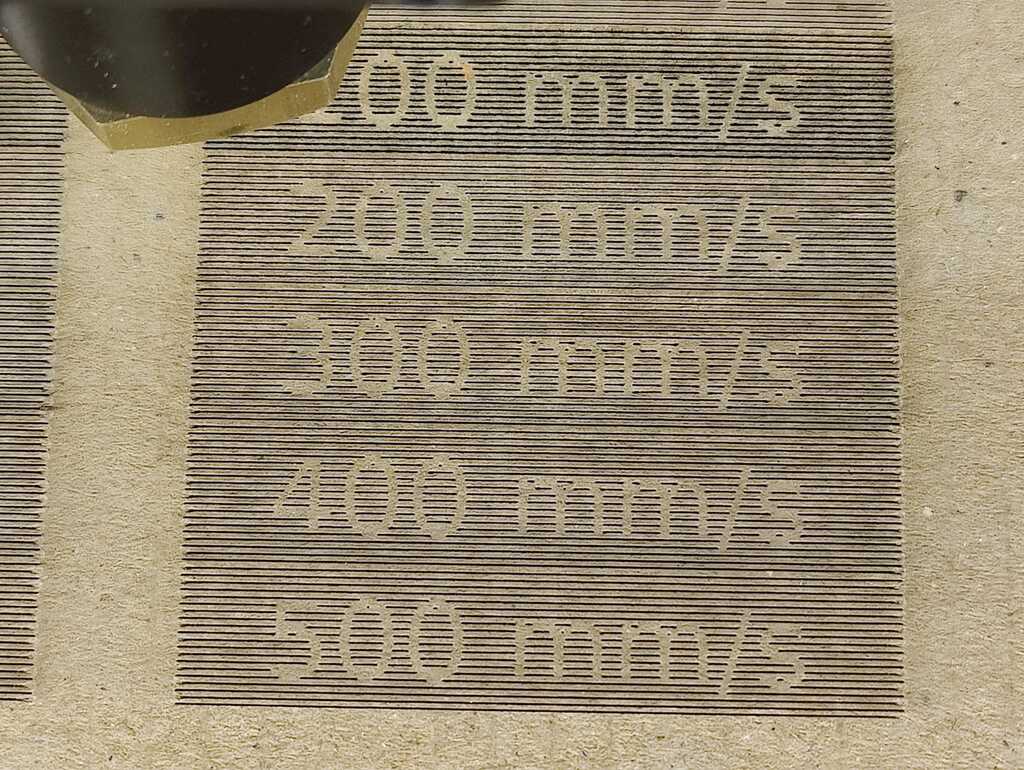 Thanks a lot egeltje for the file. Got mine tweaked now. I’m not sure, but it seems to matter what type of machine it is, as I need less than half the values that you got.

I also had to fill nearly 2 sides of a cardboard until I found the sweet spot. I also had to rise the power of the laser for better visibility on the faster speeds.
hope this helps someone.

The Fabkit/FabCore plus will be pretty similar, but the FabCore will be different.
Nice you worked out more for the FabCore and shared it, thanks

Hmmm. Seems that the line shift works great for engraving lines (vectors), but not so much for images in lightburn (0.9.24 on linux). More tweaking ahead…

Seems that the line shift works great for engraving lines

Hi @egeltje
what do you mean? Lineshift should be offsetting whenever you raster engrave.

@egeltje can you share some photos of the job and your settings.
Vector fill / raster or Image fill /Faster should be both using the line shift.

Here are more details.
I am creating a layered map of the city of Deventer. This consists of six steps:

I started with a bi-directional raster from the image at 400mm/s. 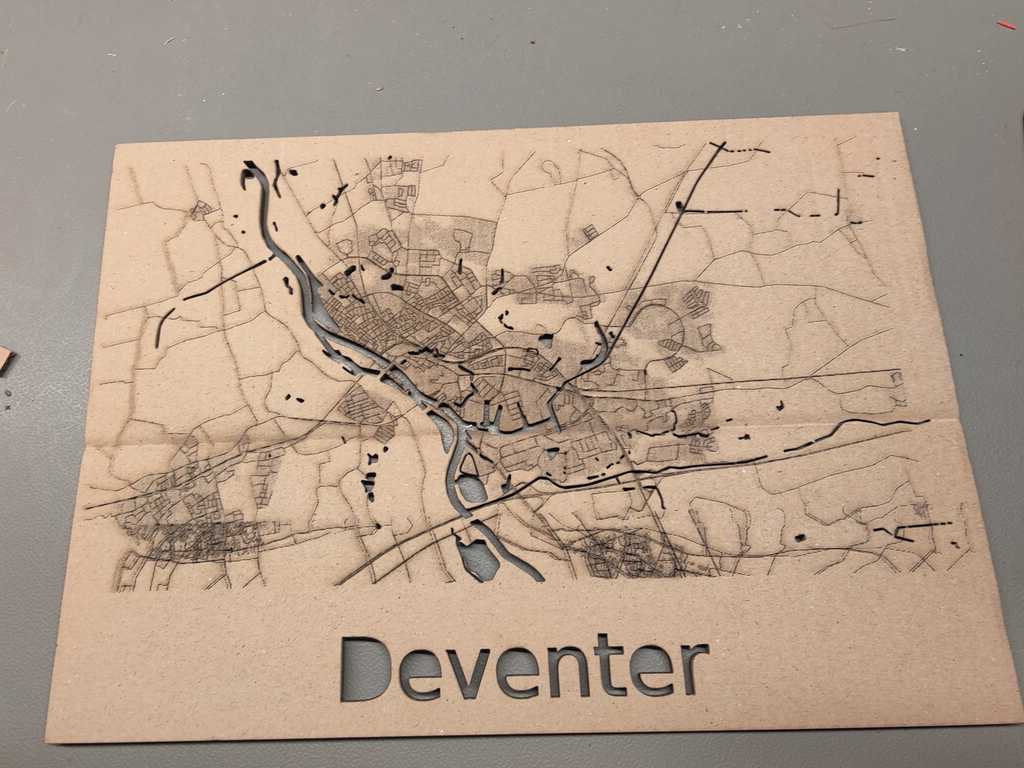 first run city map on cardboard1024×768 71.6 KB
As you can see on the bottom, there is a ghosting of the image. I restarted the job with uni-directional rastering and the ghosting was gone. But the water was cut about 5 mm too far to the right in relation to the rastered image.

So I created a test-job with an image to test the ghosting and misallignment at various speeds. 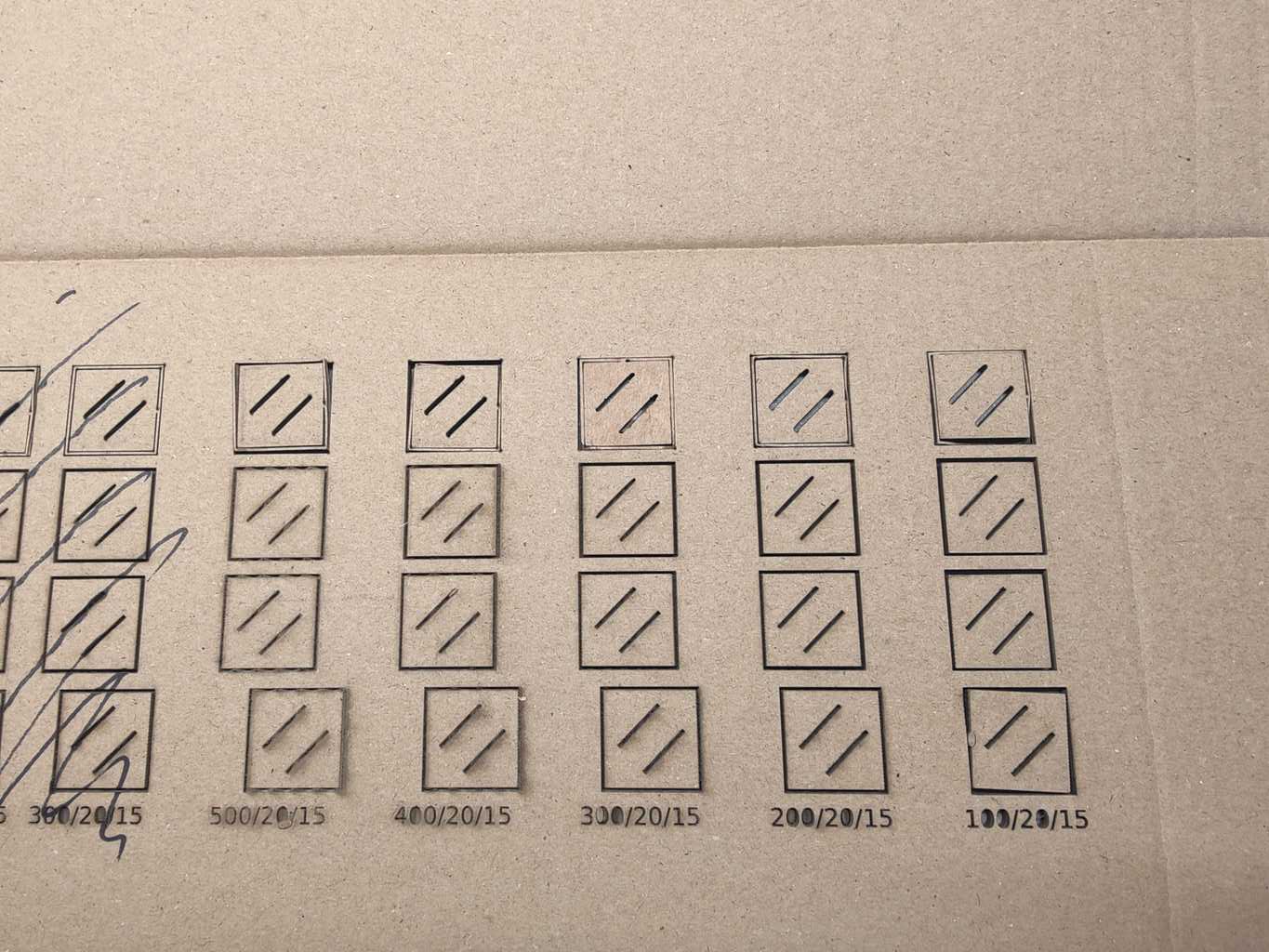 The used speeds and powers are engraved at the bottom.
Uni-directional does give a shift (as observed in the city map) but the bi-directional is sharp as a razor!

So I restarted the city map job, but the ghosting is back… 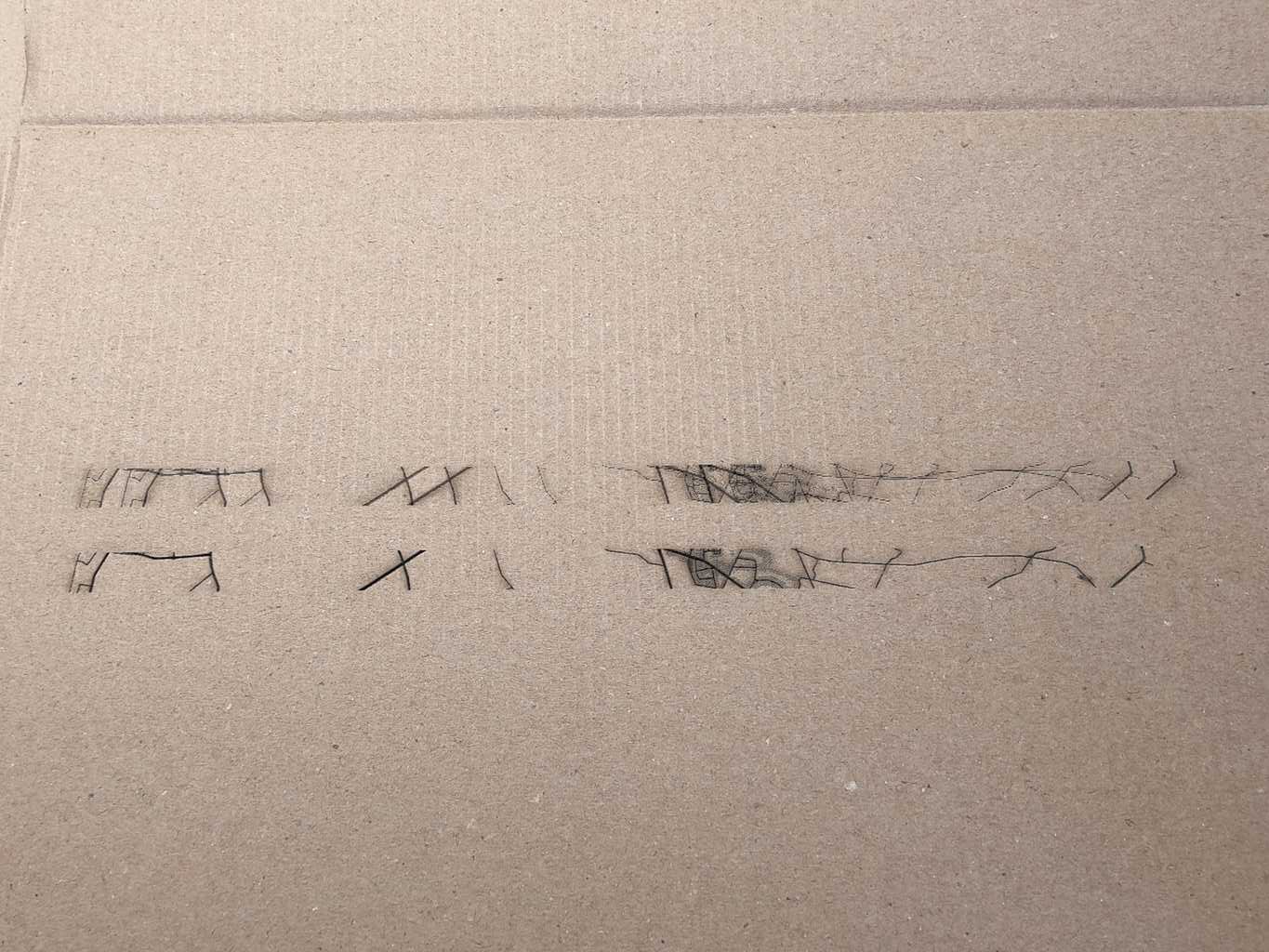 For reference, here are the layer settings for the city map (which generates ghosting) 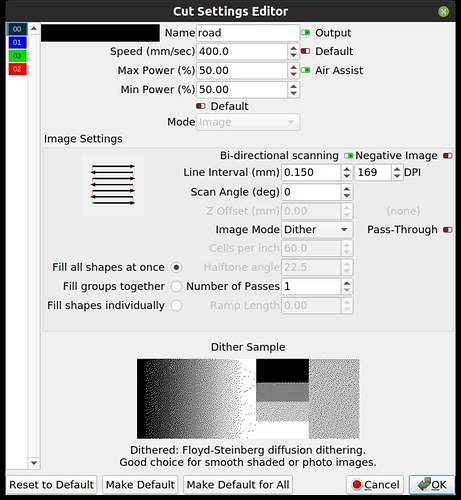 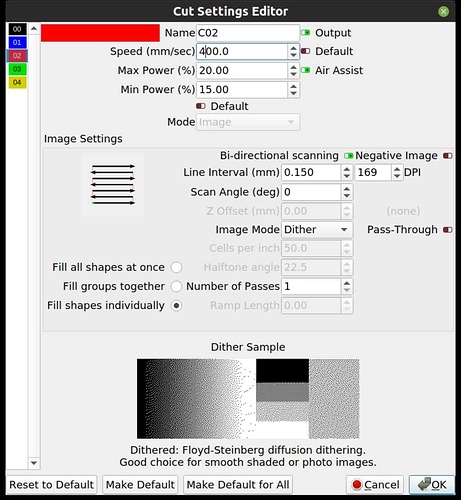 Any clues on where I might start looking at this?